The Church of Jesus Christ of the Latter-Day Saints

For full history and frequently asked questions see the link to The Church Flag™ history and FlagFAQ page located at http://thechurchflag.com/FlagFAQ/FlagFAQ.htm.

Extracted from this page:

The LDS church created and displayed The Church Flag (a.k.a. The Mormon Pioneer Flag) in the 1800s. One account of its display was during the first Utah Pioneer Day in July of 1849. The Church Flag was unfurled and raised in a celebration on Ensign Peak in Salt Lake City. You can even hear its references in songs of the church:
"High On A Mountain Top A Banner is Unfurled,
Ye Nations Now Look Up It Waves To All The World !"
(Joel H. Johnson, 1853)

The flag takes its design from historical documents recorded in the mid 1800s. The flag's beginnings can be traced back to the prophet Joseph Smith Jr. One recorded account was, in preparation to defend Nauvoo from attacks by anti-Mormon mobs on June 22, 1844 Joseph Smith Jr. gave the instruction for a "standard to be made and raised to the nation". Just five days later Joseph Smith Jr. and his brother Hyrum Smith were killed by an angry, bloodthirsty mob at Carthage jail. It was Brigham Young who continued the preparation for the standard to be lifted in the mountains of Zion. It is well known in the church that while still in Nauvoo, Brigham Young had a vision of Joseph Smith Jr., who showed him the mountain which is called now Ensign Peak, in Salt Lake City, and that he saw the "colors" fall upon that peak. In that vision Joseph said to him "Built under the point where the colors fall and you will prosper and have peace".
That's exactly what Brigham Young and the members of the church did after arriving in Salt Lake City. Many pioneer journals recorded Brigham Young preaching sermons in reference to a standard, or Mormon flag. As one account states, in Jan.13, 1846, "President Brigham Young said that the proud banner of Liberty would wave over the valleys that are within the Mountains and I know where the spot is and I know how to make this Flag. Joseph sent the colors and said where the colors settled there would be the spot". Another journal records, on May 29, 1847 that President Young said: "The standard and ensign would be reared in Zion...the standard would be a flag of every nation under heaven". Again, in 1853 it is written that Brigham Young stated that the saints had "hoisted
the flag of our independence".

B.H. Roberts explains the pioneers view of The Church Flag as this: "The Ensign that these Latter-day Saint Pioneers had in mind, and of which they had frequently spoke en route, was something larger and greater than any national flag whatsoever, and what it was meant to represent was greater than any earthly kingdom's interest...This Ensign in the minds of the Mormon Pioneers concerned not one nation, but all nations; not one epoch or age, but all epochs and all ages; not nationality but humanity; is its scope and concern. It was a sign and ensign of the Empire of Christ; it was a prophecy of the time to come when the kingdoms of this world would become the kingdom of our Lord, and of His Christ, and He shall reign forever and forever". In September 1877, an account of The Church Flag being displayed was described by a visiting Californian: "Utah history states that the flag known as the Stars and Stripes was placed on Ensign Peak about the twenty-ninth day of July 1847. The so-called flag of the Stars and Stripes placed there on that occasion was a flag having in its upper left hand corner a...field with the circle of twelve stars and in the center a...large star. The stripes on that flag, instead of being red and white stripes, were blue and white stripes and it was to be the flag denoting Mormon sovereignty over the area that they had now taken possession of...During Brigham Young's Funeral this flag hung from a second story window of Herbert C. Kimball's residence.

In fact, there is some ambiguity about the authenticity of this well known LDS flag, which has become associated with the events at Ensign Peak.

This is not the flag of the Church of Latter Day Saints (Mormons), but rather a flag associated with that church. We have no proof that this flag was used prior to the 1870's. It may be a creation of that era as there are no specific verifiable references to this particular flag in the 1840's. In 1866 Brigham Young wrote to Admiral Preble that the flag of the church was the "flag of the United States" This blue and white flag has become associated with the events of Ensign peak, but the flag may in fact be a product of the late 19th century, used to commemorate those events. This flag, with the circular star pattern in canton also seems to be trademarked. See www.thechurchflag.com

Also, we have supplied a variant of this flag with the 3-2-3-2-3 1, 13 star canton to a pro-polygamy group which referred to it as the Kingdom of God flag, however their website, www.helpingmormons.org, shows a different flag.

There are at least two surviving flags from the 1840's that are known to have been used by the Mormons. One is the Flag of the Mormon Battalion, the other is a flag associated with the personal bodyguards of Brigham Young, a group known as the Danites.

There is evidence of a third LDS flag from the 1840's supposedly flown by Sam Brannan on the good ship Brooklyn when he sailed into San Francisco Bay. After he left the Church he kept the flag. A drawing of it was published n the San Francisco examiner in 1907, but the current location of this flag is unknown. Brannan claimed the Danites, or agents of the LDS Church stole the flag.

We cannot place this flag at Ensign Peak in 1847. In fact one journal account of the eight men who climbed the peak states that the inspiration for the name is Biblical not descriptive; while another states that the "ensign" used was only a symbolic yellow bandana on a cane. We really have no proof that this flag was used in 1847. It may have been used in early pioneer celebrations, it certainly was known by the 1870's, but its true origins are still unknown.

The flags modern popularity seems to date from fairly recently, especially with the recent rededication of the park at Ensign Peak, it use by some pro-polygamy groups, and attempts to market this flag during the Utah Olympics.

The whole subject of LDS flags is fascinating and deserves our attention, but we have an obligation to post the facts as they are.

This is one of the LDS flags, not the LDS flag, we must be careful not to identify it as such.

See also a response to the comments on this page.

The Book of Mormon describes one of its main characters raising a "Title of Liberty" or "Standard of Liberty":

11 And now it came to pass that when Moroni, who was the chief commander of the armies of the Nephites, had heard of these dissensions, he was angry with Amalickiah.
12 And it came to pass that he rent his coat; and he took a piece thereof, and wrote upon it-In memory of our God, our religion, and freedom, and
our peace, our wives, and our children-and he fastened it upon the end of a pole.
13 And he fastened on his head-plate, and his abreastplate, and his shields, and girded on his armor about his loins; and he took the pole, which
had on the end thereof his rent coat, (and he called it the title of liberty) and he bowed himself to the earth, and he prayed mightily unto his God for
the blessings of liberty to rest upon his brethren, so long as there should a band of Christians remain to possess the land.

Alma 46: 36
36 And it came to pass also, that he caused the title of liberty to be hoisted upon every tower which was in all the land, which was possessed by the Nephites; and thus Moroni planted the standard of liberty among the Nephites.

Alma 51: 20
20 And the remainder of those dissenters, rather than be smitten down to the earth by the sword, yielded to the standard of liberty, and were
compelled to hoist the title of liberty upon their towers, and in their cities, and to take up arms in defence of their country.

Alma 62: 4
4 And he did raise the standard of liberty in whatsoever place he did enter, and gained whatsoever force he could in all his march towards the land of Gideon.

Flag of the Mormon Battalion 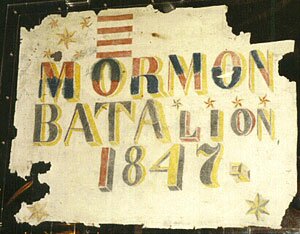 I have seen reproductions of this flag of historical significance. The Mormon battalion home page is at http://www.mormonbattalion.com/ or even more informative was http://www.three-peaks.net/battalion.htm in which the picture above is located.
Blair Elzinga, 26 December 2004