Based on an illustration in "Flags of Maritime Nations", 1914

The none-too imaginative British had the same badge for all their minor West African possessions. This one is for Sierra Leone. The Gambia differs only by having the initial "G." instead of "S.L.", and the Gold Coast (now Ghana) had "G.C."
Josh Fruhlinger, 13 February 1998

They were not that unimaginative! Although what you say is true of Gambia and Gold Coast, Sierra Leone adopted its own coat of arms in 1914. A second coat of arms (still used) was adopted in 1960: a gold lion passant on a green field; a white chief dancetty (zig-zagged) upon which are three torches. At the base two blue wavy lines on white symbolizing the sea.

With the addition of a crown surmounded 'E' on a blue disc surrounded by a chaplet of gold roses, the arms formed the Royal flag of Sierra Leone until the country became a republic in 1971.

Detail of the Badge

Flaggenbuch [neu92], has some small details slightly different, but most noticable is that it has the tree on a golden background, clearly different from the coast beside it.
Peter Hans van den Muijzenberg, 26 August 2002 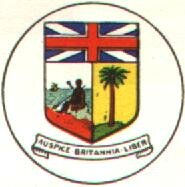 The badge is described in Carr's Flags of the World 1953 as follows, "In the top part of the shield is the Union Flag as it was prior to 1801 - with only the Crosses of St George and St Andrew. The lower part of the shield is divided into halves by a vertical line. On the one side is a liberated slave seated on the seashore with a ship in the offing; on the other on a golden ground, is a green palm-tree. Underneath is the motto: "Auspice Britannia Liber" (Free under Britain's protection)."
The National Geographic of Sept. 1934 has the palm tree on a dark brown background, and the badge generally looks darker than, e.g., in Kannik, from which I've made a scan.
Jarig Bakker, 25 September 2000