Notes: One of the last Central Asian regions to be brought fully under Russian control, parts of modern Turkmenistan continued to cling to independence until 1884, when the Khanate of Merv was annexed. This Khanate flew a plain red flag. A Turkmen SSR was created in 1925.
Stuart Notholt 25 November 1995

I have received information on the new Turkmenistan flag from the Turkmenistani Standardization and Measurement Office. Using the information I have redrawn my image of it (if I never see a Turkmeni carpet again it will be too soon). As well as changing the aspect ration, the edge ornaments on the stripe now touch the edge and all the Gulls have been redrawn. The orientation of the stars has changed - they are all now upside-down and lie along two straight lines. The crescent is also shallower.
Graham Bartram, 30 May 2001

A year after independence was regained, in 1992, Turkmenistan adopted a new national flag of extraordinary complexity. In the hoist of a relatively straightforward green flag with a white crescent and stars (symbolizing Islam) are placed five traditional carpet designs or 'guls'. The hoist stripe itself is dark red, while the guls are primarily in black, white and orange. Turkmenistan is famous for its carpets and each tribe has its own distinctive gul. Since the five guls in the flag are reportedly named after five tribes, they presumably stand for the various tribal groupings in the country.
Stuart Notholt, 25 November 1995

On 29-JAN-1997, an olive branch motif was added to Turkmenistan's nationalflag. According to a presidential decree, the olive branch is to symbolizethe peace-loving nature of the Turkmen people as well as the country's "neutral" status. Changes to the Turkmen national anthem and alphabet have also been made by presidential decree.
Christian Berghänel, 3 February 1997

From the embassy of the Kingdom of the Netherlands in Moscow the "Nederlandse Vereniging voor Vlaggenkunde" got a paper flag of the new flag of Turkmenistan. It is very exact; it even tells which exact Pantone colours should be usedin making the flag, which is in fact the most complex present day national flag - in any case for flagmakers.

As shown in the image, the laurel branches are of the same model as in the flag of the United Nations. According to a Dutch diplomat the laurel branches refer presumably to the resolution, adopted January 12, 1995 by the General Assembly of the United Nations, in which is stated that the Republic of Turkmenistan is permanent neutral. In Turkmenistan they were very proud of this resolution. In order to get the laurel branch in the red carpet stripe of the flag, the two corner designs in the bottom of the 1992 flag were omitted. It should be noted that also the crescent and stars in the new flag are of a bigger format than in the former flag. The colours used in the flag are: black Pantone Black green Pantone 342 red Pantone 187 yellow Pantone 1735.
Mark Sensen & Jos Poels, 10 March 1997

Article one of the law on "Insertions and Supplements to the Law of Turkmenistan" states that "The State Flag of Turkmenistan is a symbol of unity and independence of the nation and neutrality of the state." Article two states that in the lower part of the dark red stripe, two crossed olive branches are depicted making a single composition with the carpet gel.
Steve Stringfellow, 4 February 1997

OMRI published a report on Turkmen national holidays, including a new National Flag Day which was celebrated for the first time 19 February 1997. Since becoming independent in 1991, the number of Turkmenistan's holidays have mushroomed, reflecting the nation-building process. Flag Day was initially conceived by Turkmenistan's parliament (majlis) as a day of rest to mark President Saparmurad Niyazov's birthday. But by last February he had become increasingly sensitized to criticism that he is an absolute ruler, Niyazov consequently rejected his offer and turned the planned birthday celebration into National Flag Day. In keeping with the rapid and highly personalized manner in which changes are undertaken in Turkmenistan, Niyazov decreed that the republic's new national flag be altered. Turkmenistan's public was informed that an olive branch, similar to the one on the UN flag, symbolizing the country's neutrality and the peace-loving qualities would appear below the five motifs situated on the flag's left corner. (Source: OMRI Analytical Brief, 12 February 1997, Vol 1, No. 550)
Jan Oskar Engene, 26 February 1997

Radio Free Europe/Radio Liberty mentions an oath of allegiance that ends with words about the country, flag and president: Zokhra Meredova: Turkmenistan, my beloved Motherland, my beloved Homeland. You are always with me, in my thoughts and in my heart. For the slightest evil against you, let my hand be lost. For the slightest slander against you, let my tongue be lost. At the moment of my betrayal to my Motherland, to her sacred banner, to my President, let my breath be stopped.
Jan Oskar Engene, 26 February 1997

Detail of the "Carpet"

by Graham Bartram
Click on the image for a larger view

Standard (flag) of Turkmenistan President adopted on 15 July 1996. The flag is green with white crescent and 5 stars near the hoist and yellow 7-headed eagle in the fly. The eagle have a snake in his claws.
Victor Lomantsov, 23 December 2003

The Flag of Turkmenistan President in accordance with Album des Pavillons 2001 have the ratio 1:2.
Martin Grieve, 23 September 2002

At http://vector-images.co m/image.php?epsid=3258 there is a third, similar variant of presidential standard, but with a yellow star and text around the eagle.
Christian Berghänel, 6 December 2005

The flag of the President of the Republic of Turkmenistan is different from the image which was shown on FOTW before. The right image at http://www .turkmenistan.gov.tm/countri/zakon/zakon-16.html.
Valentin Poposki, 14 July 2006       [see image of Z.Heimer above] 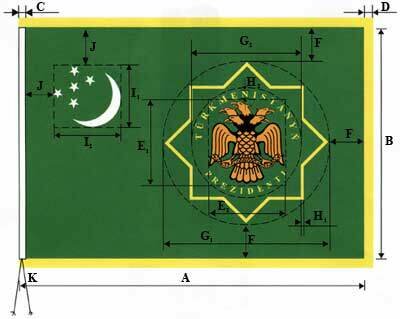 The new President of Turkmenistan Gurbanguly Berdymuhammedov has issued a presidential decree amending the decree "About the standard (flag) of the President of Turkmenistan". The name of the late President Sapurmarat Turkmenbashi has been deleted from the emblem, and the words _President of Turkmenistan_ have been rearranged. See text (in Russian) of the Annex to the decree (with full detailed measures) at http://www.turkm enistan.gov.tm/countri/c&symbol.html, including construction sheet of the flag. Here my translation (and my comments):
Measures of elements of the standard (flag) of the President of Turkmenistan
A Length 1,5/1B
B Width 1/1,5B
C Width of the white strip (at hoist) 0,025B
D Width of fringe 0,04B
Measures of the image of the eagle (as inserted in a rectangle):
E1 Lateral sides 0,38B
E2 Top and bottom sides 0,34B
Octahedron (eight pointed star) with inscription/image of the eagle:
F Distance from the edges of the octahedron to the edges of the flag, except for left one, 0,15B
G1 Diameter of the circle in which the octahedron is contained 0,72B
G2 Diameter of the circle on which external edge the inscription "TURKMENISTANYN" "PREZIDENTI" is contained 0,45B
H1 Width of the yellow-golden border of the octahedron 0,015B
H2 Height of letters of the inscription 0,025B
Image of half moon and stars (as inserted in a rectangle):
I1 Lateral sides 0,27B
I2 Top and bottom sides 0,29B
J Distance from the (top side and left side of the) rectangle up to the top edge and white strip 0,15B
K Length of cords (???) 0,25B
Antonio Guttiérrez, 18 March 2007

With the death of President Niyazov, I noticed some of the mourning practices for the Turkmenistan flag. According to http://news.yahoo.com/photo/061221/photos_wl/2006 _12_21t114230_450x289_us_turkmenistan_sunshine, the flag is flown at half staff, with a tiny black ribbon at the hoist (not sure why the Pakistan flag is there). At the Turkmen Embassy in Moscow, a black ribbon was tied to the flag pole. The flag was stationary, so it could not be hoisted or lowered.)
Zachary Harden, 21 December 2006

That's the standard practice in the former Soviet Republics. Many years ago I saw a TV footage of the Russian flag flown at half mast above a major government buiilding, with a black ribbon immediately above the flag.
Miles Li, 21 December 2006

The Russian News and Information Agency Novosti (http://fr.rian.ru/a nalysis/20061222/57581743.html) , 22 December 2006, has compiled the most excentric decrees of the late president of Turkmenistan Saparmurat Niazov. The self-proclaimed Turkmenbashi (All Turkomans' father) changed the names of the days and months of the calendar. Accordingly, January was renamed Turkmenbashi and February was renamed the Month of the Flag.
Ivan Sache, 22 December 2006

The site, of the Turkmenistan Democratic People's Movement "Agzybirlik" was, over the time, showing several proposals for the flag of Democratic Turkmenistan (as opposed to the totalitarian regimes of Niyazov and Berdymukhammedov) and presently features what appears as the most favored version. The image shown now on the website doesn't correspond with the description given in Turkmen and Russian languages, so I will attempt to translate it for all vexi-scientist dedicated to the studies of the flags. Here is my rough translation from Russian:
"Suggested project of the future state flag of the Democratic Turkmenistan. The theme of the flag is simple and dear to the heart of every Turkmen: scarlet and green (al-yashyl)-are always associated by the Turkmen with abundance and welfare, these colors are the the symbols of triumph, kindness and justice.
Black color-reminds us of hard times being the share of our nation, about the tests trying the existence of the Turkmen Nation. And the disc of sun on the flag is the symbol of the richness of our soil and the source of life. There are other historical parallels to the choice of these three colors:
Red-connected with the Communist history of the country which saw the founding of the modern state of Turkmenistan.
Green- is connected with Islam, the religious faith of the nation.
Black-the color of the flag of the Medieval Turkmen state, suggesting the symbolic continuity of Turkmen statehood.
None of these colors should prevail over others, creating an image of the natural tricolor and spiritual basis for the eternal unity of the nation of Democratic Turkmenistan and of the people of various views on the history and the future of the country as well."
Chrystian Kretowicz, 1 August 2008

In 2003, July new Law about CoA of Turkmenistan was adopted. The article 2 of this law describes CoA as following:
The State CoA of Turkmenistan is green octahedron with golden-yellow edge. Inside the octahedron there are 2 inscribed circles - blue and red.
Those circles are aparted each other with golden-yellow stripes of the same width.
On the octahedron's green backround around the red circle the main elemnts of national treasure and state symbols are painted:
in the lower part - 7 opened quinquevalve white cotton bolls with green leaves;
in the middle part - golden-yellow wheat ears, 2 ears from side of CoA
in the upper part - crescend with 5 five-pointed white stars
On the red stripe of red circle which is of 2 diameters of blue circle there are five traditional carpet designs or 'guls' clockwise painted. The names of these 'guls' are akhalteke, salyr, aersary, chovdur, yomut. These "guls" symbolyse friendship and unity of Turkmen people.
In the blue circle horse Yanardag is painted. This horse of Akhaltekin breed and belongs to Saparmurat Niyazov,first and life president of independent and neutral Turkmenistan. This horse is proud of turkmen people and embodiment of classic example of unique Akhaltekin horse.
This Law cancelled previous one and old CoA adopted in 1992.
Source: http://www .turkmenistan.gov.tm/countri/zakon/zakon-15.html
Mikhail Kaplinsky, 11 May 2007