The International Labour Organization formulates policies and programmes to improve working conditions and employment opportunities, and sets labour standards used by countries around the world. The flag is UNO blue, with the letters ILO surrounded by an interrupted cogwheel, and the UNO branches.
Blas Delgado Ortiz, 24 June 2000

The ILO web site (www.ilo.org) contains some interesting documents related to the ILO flag. Apparently the flag was created in 1969, but was not officially adopted until 2005. The resolution adopting the flag also provided a detailed set of regulations for its use and display. The November 2004 agenda item from the ILO Committee on Legal Issues and International Labor Standards, which recommended adoption, is interesting:

The resolution of 15 June 2005 specified the dimensions of the flag as 2x3, 3x5, or "the same proportions as those of the national flag of any country in which the International Labour Organization flag is flown." I wonder if the ILO has an office in Nepal.
Peter Ansoff, 8 March 2007

French version of the flag 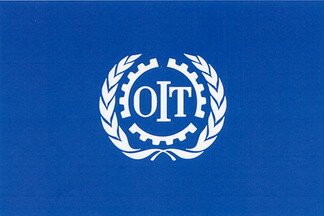 The Magazine “World of Work” in Number 54 from August 2005 wrote:
“Though the ILO flag has been used for decades, its presence was merely “decorative” according to a 1977 letter from the ILO to the Flag Research Center in the U.S., which said “the ILO does not have a flag….we have used it solely for decorative purposes inside meeting rooms on a number of occasions, but it cannot be used outdoors as no steps have been taken for its adoption.”
The ILO flag had been designed and manufactured on the occasion of the 50th Anniversary of the Organization in 1969 but never properly registered. Few ILO staff, and even fewer outsiders, knew that what most people considered to be the official banner of the Organization – bearing the logo approved by then Director-General David A. Morse in 1967 on a light blue background – had no official standing. As a result, it could not be displayed at official gatherings and was subject to other restrictive conditions. That began to change this year as the ILO moved forward in the official adoption process. Why was the ILO flag merely a “decoration” for so many years? The issue goes back to the founding of the UN in 1945 when the ILO and other specialized agencies were discouraged from adopting their own official flags on the grounds that a proliferation of banners would detract from the sense that all specialized agencies should be seen as part of the broader UN system. But times change. Over the years, other UN organizations have adopted their own flags to demonstrate their unique standing within the UN family. The adoption of a resolution by the International Labour Conference in June (2005) legalizing the flag ensures that the ILO will be no exception. No longer a mere decoration, the ILO flag will now take its rightful place alongside other agency flags representing today’s UN.
So, we can conclude that the ILO flag was adopted in June 2005, and the French version in December 2006.
Valentin Poposki, 16 April 2007