Alternate versions of the flag

The International Telecommunications Union has a typical flag following the UNO pattern. The Office of the Secretary General shows a different (I suppose, modernized)
flag behind Mr TourÚ: http://www.itu.int/osg/ which is better viewed here (a double-sided flag, apparently), as used at the World Summit on the Information Society, Tunis 2005: http://www.itu.int/wsis/plib/detail.asp?y=2005&n=6850 While the office item seems to have a pale blue globe the outdoor version is more striking. Common are the white ground, red flash, and dark blue (fimbriated) initials. The above official site has a French version showing an æUITÆ logo which ought to appear on flags as well, I feel.
Jan Mertens, 13 April 2007 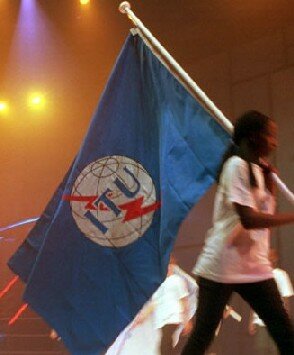