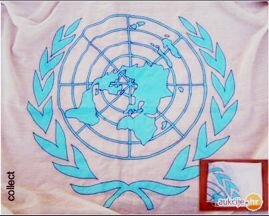 Description of the Flag

At http://www.aukcije.hr/item.php?id=858495 one can see the flag allegedly used by UNPROFOR during their mission in Croatia in the 1990s. This flag was, as claimed by the seller, hoisted from the UNPROFOR headquarters in Zagreb in Selska Street. I can't say that I remember such flag, but it does not mean that it is not true.

Apparently, the flag is white with light blue UN emblem - the same as the UN flag but of inverted colours.
ˇeljko Heimer, 4 January 2010