based on image by Alan Ferber and António Martins, 23 November 2001

The official flag of the County of Los Angeles is blue, green and gold.

The blue signifies clear skies. the green border is to keep Los Angeles beautiful and the gold lettering "County of Los Angeles" stands for the land of opportunity for everyone since gold was discovered in California.

The seal is the official seal of the County of Los Angeles.

Former Supervisor Kenneth Hahn designed the flag. The flag was approved on October 17, 1967 by the Board of Supervisors and flew for the first time in front of the County Courthouse on March 28, 1968.

I can confirm that the image of the LA County, California, flag looks very much like the real thing. The colors (including the light blue) are very close. The only difference I can see is that the actual flags appear longer.
Edward Mooney, 23 November 2001

As of September 14, 2004, Los Angeles County has a new seal and a new flag. The seal was approved 3:2 by the supervisors. During the hearing, preceding the vote, the Mayor of Signal Hill lamented the loss of the oil derricks, a Chayenne woman from Van Nuys expressed indignation for the subservient depiction of the Native American character in the seal and Antonovich criticized the "back door" view of the mission church. In the last moment, Don Knabe suggested a plain circle with the words "Los Angeles County" within it, but it was rejected 3:2. It will cost an estimated $800,000 to gradually replace the seals and flags, due to wear and tear. But it is not the end of the story yet, as there is a strong drive to gather enough signatures to force the issue of the seal's change on the November ballot (same for Redlands).
Chris Kretowicz, 15 September 2004

Reuters reported on 26 May 2004 that the American Civil Liberties Union may sue Los Angeles County unless they come up with a plan to remove a cross from the
county seal. The ACLU objects to the use of a religious symbol on a government item, the county supervisors claim it appearance is based on history. Since the seal is a major component of the county flag then the flag would also have to be changed to reflect a modified seal.
Michael P. Smuda, 26 May 2004

by Millard Sheets and Antonio Martins, 23 November 2001, based on http://www.co.la.ca.us/flag.htm

The County seal was designed by former Supervisor Kenneth Hahn and adopted by the Board of Supervisors March 1, 1957.

The Los Angeles Sheriff's Department (LASD) is the second-largest law enforcement agency in the United States (second only to the New York Police Department). It provides sheriff services to California's most populous county as well as municipal police services to many of the county's cities. In February 2002 a panel of seven judges, coached by Ted Kaye (author of Good Flag, Bad Flag) and organized by Lt. Dave Waters, selected designs from among 726 entries in a two-day session. Sheriff Lee Baca chose and improved the final design.

Uniformed LASD personnel wear a tan shirt, green pants, and a black belt and shoes. Their badge is a gold six-pointed star with enlarged rounded tips; in the center a blue ring with "Los Angeles Sheriff's Department" encircles a silver grizzly bear (similar to the bear on the California state flag). The winning design combined the wavy center stripe from one entry, the stylized badge from another entry, and colors as modified by the sheriff. The wave design was submitted by Deputy Anthony Morga; the badge design was jointly submitted by Sergeant Brian Moriguchi and Lieutenant Richard Shaw. The upward-curving stripe symbolized to the judges "continuous progress into the future", while the colors represented the standard uniform and the badge uniquely identified the department, with the bear additionally representing California.

In the process of evaluating entries, a minority of judges favored retaining "LASD" or even "Los Angeles Sheriff's Department" on the flag. They raised the valid concern that an organization as narrowly focused as LASD could not be adequately symbolized to the general public without lettering. Finally one judge, a female captain who commanded one of LASD's prisons, summarized - in terms all could understand - why words on flags are unnecessary, saying: "It's just like a hooker - we all know what a hooker looks like, she doesn't have a sign on her back saying HOOKER!." 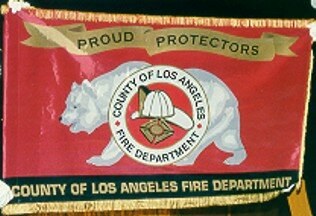