In 1837, a star was added, representing Michigan, bringing the total number of stars on the U.S. flag to 26. There were thirteen stripes representing the thirteen original colonies.

The Michigan flag was adopted August 1, 1911 as part of the unfortunate trend creating so many navy blue state flags with state seals. The state's first flag featured on one side a portrait of Michigan's first governor, Stevens T. Mason. On the other side was the state coat of arms and “a soldier and a lady.” In 1865, the state flag changed to display the Michigan coat of arms on one side and the United States coat of arms on the other side. However, this was never codified by the legislature.

The Michigan state seal was designed by General Lewis Cass, an early territorial governor, and officially adopted at the first constitutional convention in 1836.

The shield bears a picture of a frontiersman clad in buckskin, standing on a peninsula jutting into a lake, with a rising/setting sun on the horizon. The frontiersman holds his right hand open in a gesture of friendship, but holds a rifle in his life hand, signifying his determination to protect himself.

There are three Latin phrases in the seal. On the shield is "Tuebor", which translates as "I will defend," a statement recognizing the role of Michigan's citizens in fighting the British forces during the War of 1812. (In fact, several battles of that war were fought within the borders of Michigan.) On the scroll below the shield is "Si quaeris peninsulam amoenam, circumspice," which translates as "If you seek a pleasant peninsula, look around you." This is a reference both to Michigan's geographic position between the Great Lakes, and to its natural beauty. Above the seal is "E pluribus unum," which translates as "From many, one." This is the motto of the United States, and the position at the top of the seal, along with the national bird (a bald eagle), symbolizes the sovereignty of the Federal government over the state government.

The supporters are, on the left an American elk, or wapiti, and on the right a moose. Both were native to Michigan when the seal was designed.

2.24 Governor's flag. The governor's flag shall be white charged with the arms of the state.
Joe McMillan, 14 February 2000

"I pledge allegiance to the flag of Michigan, and to the state for which it stands, two beautiful peninsulas united by a bridge of steel, where equal opportunity and justice to all is our ideal."
Joe McMillan, 13 August 1999 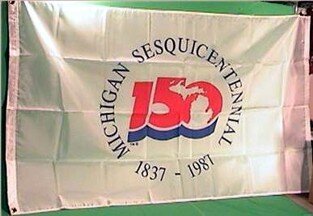 The state military crest, which is the crest used in the coats of arms of units of the National Guard, as granted by the precursor organizations of what is now the Army Institute of Heraldry. The official Institute of Heraldry blazon is "A griffin segreant or."
Joe McMillan, 21 April 2000