About the flag and seal

In New England, the Town Flag and Seal enshrines for eternity the Heritage and Legacy of the historic past. With this idea in mind this short history of the Flag and Seal of the Town of Hampton, New Hampshire has been researched and prepared by the Meeting House Green Memorial and Historical Association and American Legion Post #35 in accordance with action taken by the voters of the Community at the Annual Town Meeting on Tuesday the Ninth day of March 1965.

In connection with the preparation and celebration of the 300th Tercentenary Anniversary of the Town of Hampton, the Selectmen were authorized to adopt an official Town Seal. After examining several proposed seals, the Selectmen adopted as the official Town Seal that was designed and submitted by Mrs. Hazle Leavitt Smith of Wollaston, Massachusetts. The seal emphasized scenes truly typical of the Town of Hampton. Hampton Academy with its picturesque steeple, Great Boar's Head and the salt marsh with its haycocks symbolizes the rich historical heritage that once was Hampton.

The Indian name "Winnacunnet", the "Beautiful Place of Pines", was the original name given by the founding fathers to their new settlement.

The rosettes and outline of the seal being taken from the old town Seal of South Hampton, England, incorporates the original home of our early founding settlers. 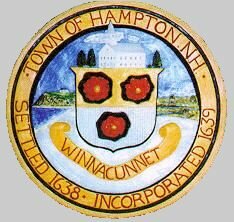 In 1934, as the result of appropriate legislative action taken by the General Court (Legislative Body) of the State of New Hampshire, all previous Town Charters were revoked. New Charters were drawn by the various Towns throughout New Hampshire with many Communities adopting the same or new Seals and Flags. The Town of Hampton adopts a new Town Seal but does not adopt an official Flag although a flag will be designed and used for many years.

At the suggestion of the Selectmen, the Tercentenary Committee ordered a Town Flag from the Annin Flag Company of New York City. A sketch of this with a description and color of the scenes was sent to the company. The design of the flag was to be the same as the Town Seal designed by Mrs. Hazle Leavitt Smith. The flag was to have an antique white background with a gold border. The design was to be of Royal Blue and Gold.

When the flag was delivered to the town, it was discovered that the New York craftsmen had never seen a marsh with Staddles and Haycocks. The staddles never appeared on the flag at all, the Haycocks had become maple trees, the marsh had become a rolling meadow and Hampton River, a winding country road. The rest of the design was in keeping with the original Seal.

After the Town Tercentenary Celebration, the Selectmen turned the flag over to the American Legion [Post #35] feeling that this organization would continue to carry the flag in parades and make it available for town functions and celebrations.

The American Legion Post #35 continued to proudly carry the flag and the flag was part of every town parade until 1961.

In 1959, a committee was appointed by the American Legion Post to meet with the Selectmen and obtain permission for the American Legion to obtain a new flag, at all cost to the Legion, to replace the original but unofficial flag. This flag was felt to be too small, the design not too clear and the colors not in keeping with the true idea of the design.

The American Legion Committee made up of Roland W. Paige, Mr. Donald W. Harmon and Mr. Everett W. Mann contacted the Flag Shop in Amesbury, Massachusetts. The Flag Shop agreed to the task. By that next Summer, the Dettra Flag Company of Oaks, Pennsylvania had completed the job and the new flag was delivered to the American Legion Post at a cost of $425.00.

In July of 1960, the Flag was presented to a meeting of the American Legion Post. The Flag was placed on display at the Historical Meeting House Museum that next summer during Old Home Day as well as being carried in the Town parades for the first time that same year (1961).

Mr. Roland W. Paige at the Annual Meeting of the Meeting House Green Memorial and Historical Association in November 1964 presented a Motion that the Historical Society go on record as supporting and co-sponsoring with the American Legion Post #35 an Article to be placed in the Town Warrant at the Town Meeting to be held in March of 1965. This Article would have "the Town adopt the newly designed flag as the official town flag." A second motion put the Society on record as "adopting the color scheme of the newly designed flag" as noted in the following description: (This was also the description read by Mr. Paige at the Town Meeting and unanimously approved by the voters of the Town):

"The flag itself is of light blue, denoting the sea from which the settlers came. The center of the flag is the Seal of the Town of Hampton which was adopted for the 300th Anniversary in 1938. The outer circle is a border of gold followed by a border of black. Next to the letters TOWN OF HAMPTON, N.H. - SETTLED 1638 - INCORPORATED 1639 on a field of dark gold. Next is another border of black.