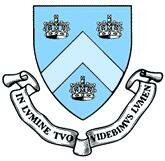 The university has (had?) a flag, light "Columbia" blue with a white royal crown in the center symbolizing the institution's original name, King's College, flanked by the letters C and U. The coat of arms of the university is azure a chevron argent between three king's crowns or.
Al Kirsch (Columbia '61), 27 April 2003

The Columbia University Club flag is a white "C" on light blue. Beware: University flags change frequently, for special occasions and the like.
Nathan Lamm, 27 April 2003

Information on the history of the Fraternity and description of its flag, from the Fraternity website: http://www.columbia.edu/cu/sigep/symbols.html.

Origin of the Fraternity
Carter Ashton Jenkens, the 18-year-old son of a minister, had been a student at Rutgers University, New Jersey, where he had joined Chi Phi Fraternity. When he transferred to Richmond College in the fall of 1900, his companions were to take the place of the Chi Phi brothers he had left behind at Rutgers. During the course of the term, he found five men who had already been drawn into a bond of an informal fellowship, and he urged them to join him in applying for a charter of Chi Phi at Richmond College. They agreed, and the request for charter was forwarded to Chi Phi only to meet with refusal because Chi Phi felt that Richmond College, as any college with less then 300 students, was too small for the establishment of a Chi Phi chapter. Wanting to maintain their fellowship, the six men, Jenkens, William Carter, Thomas Wright, William Phillips, Benjamin Gaw, and William Wallace, decided to form their own local fraternity.

Flags
The Fraternity flag has a background of purple with a red bar extending diagonally from the upper left corner to the lower right corner, this bar fimbriated by a narrow band of gold from the purple background. In the center of the flag, mounted upon a red bar, appears a gold star of five points. The 1955 Conclave authorized an alternative form for the official flag. In this form the Greek letters SFE are placed in the upper right corner of the regulation flag while the chapter designation is placed in the lower left corner. The purpose is for plainer identification of the flag when it is used for display. The flag with letters is commonly called the "display flag" and the plain flag the "ritual flag." Every chapter should have a display flag and a ritual flag.