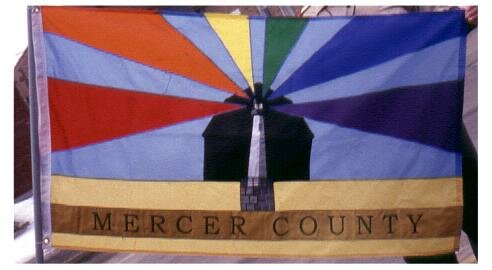 Mercer County (on the line with Indiana about 70 miles north of Dayton), is seeking designs for the county flag. The city of Celina, the county seat, already has a flag. This is for the bicentennial of the state of Ohio in 2003.

In terms of county history, we were the site of the biggest defeat of the U.S. Army by Indians in St. Clair's Defeat in 1791. Over 1200 men were killed or wounded and left behind. This dwarfs the defeat at the Little Big Horn in 1876 where Custer lost less than 300 men. A second battle was fought on the site a few years later when Gen. Anthony Wayne brought the U.S. Army Legion up from what is now Cincinnati and built a fort on the site called Ft. Recovery (the town bears this name today). Wayne went on to defeat the Indian Confederation at Fallen Timbers and, with the Treaty Of Greeneville, established what became the state of Ohio and what would eventually become the state of Indiana (that name coming from the Indian territory). Mercer County was named after Gen. Hugh Mercer of the Revolutionary War Continental Army.
Greg Biggs, 31 October 2001

I took the photo of the Mercer County flag (above) at the Bicentennial Parade for Statehood Day in Chillicothe (Ohio's first capital) on March 1. The county flags (88 of them) were all represented, many of them new for the occasion. There is some plan to exhibit them in Columbus, I understand, but the delay seems to be a lack of flagpoles. I'm promised a call from a state employee when/if this happens.

Interestingly enough, in spite of what I thought was an historic first for the state, none of the local media here or in Cincinnati (where Pete Kinderman was observing) even mentioned the parade. What little coverage there was consisted of the governor's unveiling of a commemorative Ohio postage stamp and the ringing of a bicentennial bell (each county is getting one). Flags were neither mentioned nor pictured.
John Purcell, 11 March 2003