Snow & Bacon, New York (mid 19th century)
I don't have anything on this firm. The flag was a very boring white burgee with the initials SB in black.
Source:  chart of "Private Signals of the Merchants of New York"

Snow & Bacon. Such a flag is ascribed as being for Snow & Burgess in "South Street" (Richard C. McKay) but unfortunately this is the only mention about the firm. 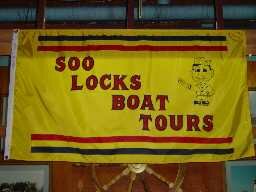 On a yellow flag the red words SOO LOCK BOAT TOURS are placed on a descending diagonal, accompanied by a horizontal green-yellow-red band at the top and a similar red-yellow-green one at the bottom. A laughing sailor is placed between the bands and at the right of three of the four words, pointing at them.

This firm offers tours in and around the Soo Locks, simply called Soo Locks Boat Tours:

"The St. Mary's River is the only water connection between Lake Superior and the Great Lakes. However, there is a section of the river known as the St. Mary's Rapids where the water falls about 21 feet from the level of Lake Superior to the level of the lower lakes. The natural barrier made it necessary for the construction of the Sault Locks, a project known as the St. Mary's Falls Canal. The first lock was built in 1797, on the Canadian side, but was destroyed in the War of 1812. The United States built its first lock in 1855. Today there are 4 locks in use, continuously being visited by ships and tourists alike."

This company operates five boats in all and is situated in Sault Ste Marie, Michigan. It uses a flag which is rather garish compared to the very classic design of Lock Tours Canada. See this blog.

The image here can be seen waving as a jack on some photos of the company website.

Photo of flag in usage: http://www.cs.mtu.edu/~shene/DigiCam/Gallery/Keewenaw/Soo-Locks/sightseeing-boat-2.jpg.

South Atlantic Steamship Line, Savannah, Georgia
This company seems to have operated scheduled trans-Atlantic and coastwise services out of the southern part of the United States from the late 1920s until at least the early 1950s, and was well enough established to belong to the organizations representing the leading lines. The two flags used were both rather attractive and of somewhat unusual design for a U.S. company:
Source: Wedge (1951) - A yellow swallowtail with a dark blue horizontal stripe bordered in white.
Source: Stewart (1953) - A white pennant bordered with blue and yellow, the blue on the outside edge of the pennant.

South Atlantic Steamship Line. According to Loughran 1979 it began life as the American Palmetto Line with a blue flag bearing the white letters "APL". It has also been shown as South Atlantic Mail line.

One of the Lykes companies operated services in the name of Southern States Line.

Southern Steamship Co.
Not much on this company. The flag was white with a black lozenge bearing a white S. The one shown for "Southern States Line" in National Geographic (1934) has a similar design with shallow swallowtail and no "S" and I assume the companies were the same or related.
Source: Wedge (1951)

Southern Steamship Lines. The flag showing in National Geographic belongs to Southern States Line shown above. Talbot-Booth in his 1942 and 1944 books mentions both companies having Southern Steamship Lines based Philadelphia and the other New Orleans. In his Merchant Ships editions he does not show a fleet list for the company which suggests to me that it was involved in the domestic trade. He also does not show a flag but he does give a funnel showing a blue diamond bearing the white "S" on a white band. This compares with Brown 1951 showing a black diamond on the white band so this raises the possibility that the flag diamond could also be blue and also that it might not be throughout the field as his funnel diamond only touches top and bottom of the band. However funnel diamonds do not always agree with the flag as dependent of the funnel width there could be too much distortion.

Spofford & Tileston, New York (by 1845-at least 1874)
Spofford & Tileston were in business by at least 1845 running a steam packet service from New York to Charleston. In 1852 they began operating a packet service to Liverpool as well, and obviously, judging from the label on this flag in Manning, also served the West Indies.  The flag was yellow with a blue cross, the letters S and T in white on the horizontal arm.  The image here shows the letters spread out as in PSMNY; Manning shows them together at the center.
Sources: chart of "Private Signals of the Merchants of New York"; Manning (1874) as Spofford's West India Line).
Joe McMillan, 22 November 2001

Spofford & Tiletson. The letters being close together is also shown in "South Street" (Richard C. McKay) who gives the partnership as being formed by Paul N. Spofford and Thomas Tileston in 1819 as commission agents, later becoming agents for a line of sloops operating New York-Boston and then charterers and finally owners, being involved in the first two coastwise steamships "Southerner" and "Northerner" which commenced trading in 1846 and 1847 respectively, and starting a Liverpool Line in 1852. Up until 1860 they had a mail contract to Charleston, Savannah, Key West and Havana which seems to cover the West Indies reference.
Neale Rosanoski, 1 August 2004

The flag of the 19th Century US shipping company of Spofford & Tileston can be seen on a page describing a print (ca. 1846) of the 'Southerner', flying the house flag. The image is clickable, leading to this page. Here, too, the company initials are spread out. Relevant extract added here and free to look at, whereas the print will cost you 3,500 USD.
Jan Mertens, 24 May 2006

Sprague, Robinson & Co, New York (mid 19th century)
No information. The flag was blue with a white crescent moon in the hoist.
Source:  chart of "Private Signals of the Merchants of New York"
Joe McMillan, 22 November 2001

Sprague Steamship Co (C. H. Sprague and Son), Boston
All I have on this company is that it was the managing agent for government-owned ships under the title of the American Republics Line, running from the U.S. to South America in  the 1930s. It was a sufficiently well-established firm to be a member of the American Ship Owners Association, the grouping of large liner companies on the Atlantic coast, during the same period. The flag was a red burgee with a large blue triangle, its base on the hoist and its apex at the fork, a white S on the center of the triangle.
Sources: Stewart (1953), US Navy's 1961 H.O.
Joe McMillan, 22 November 2001

Sprague Steamship Co. C.H. Sprague & Son may have been agents for American Republics Line but according to Talbot-Booth and Roger Jordan in their publications dealing with the merchant fleets in WW2 the actual operations were handled by Moore-McCormack Lines and this is borne out by Lloyds showing the older vessels as part of the Moore-McCormack fleet after the war, the new ships built in 1941 having been converted into escort carriers. Spragues themselves only seem to have become involved in ship operations after the war when Sprague Steamship Co. makes it appearance until around 1960. Brown 1951 and 1952 show a slightly different flag with the letter being squarish.
Neale Rosanoski, 1 August 2004

I have a number of flags that date back into the 1950's and before. They seemed to have varied a bit. There were three companies and how exactly they were related I cannot say definitively: C. H. Sprague and Son, Sprague Steam Ship Company and Sprague Steam Ship Agency. There is an anniversary book I believe called Sprague Energy (Axel Johnson group) that discusses the evolution of the companies. Family history is assertive that The Sprague Steam Ship Agency was very involved in manning and supporting the Liberty Ship Operations in the N Atlantic in WWII.

C H Sprague and Son was a coal mining and distribution company with its origin in coastwise shipping. It owned and chartered vessels primarily to move coal into New England from the Docks at Newport News. The Sprague Steamship Agency fit into that function for the parent company and branched out where possible. The separated entities (or divisions?), Sprague Steam Ship Company, also owned(?), chartered and ran vessels from the US to South America and after the war used the coal distribution network to move refined oil into New England. The Sprague Steam Ship Company was operating other vessels and in a tussle which it did not get the best of and was finally disbanded by C H Sprague and Son in favor of chartering trans-Atlantic and coastwise. See http://moore-mccormack.com/MML_Timeline.htm.

My father worked for the Steamship Company in the 1950's. I am led to believe that the service to South America continued after the war. The names of the vessels were Celestial and Wideawake in general cargo service. I have a full model from my grandfather's office. It is my recollection that the Sprague Steam Ship Agency was also disbanded in the 1970's before C H Sprague and Son was sold first to Shell and then by Shell to Axel Johnson. The Sprague Flag in a stylized form is still used by Sprague Energy. I am told that the last vessel sunk by German U-boats off New England in WWII was a Sprague Steamship Co.
Phineas Sprague Jr., 22 September 2005

My grandfather was captain on their ships for many years through the 1st and 2nd world wars up until 1963. Sprague was founded in 1870 by Charles H. Sprague. Before founding the company, Mr. Sprague learned the technology of mining while employed at a coal mining company. Armed with the knowledge of both coal mining and transportation, Mr. Sprague established the Charles H. Sprague Company. In the beginning, the company helped to meet the explosive demand for coal, which was being fueled by the industrial age. During World War I, the company became the major supplier of coal to America's European allies. To facilitate the transportation of millions of tons of coal across the Atlantic, the Sprague Steamship Company was founded. By World War II, the company was operating eleven terminals and a fleet of 27 vessels transporting coal and other products throughout the world. Its role as a worldwide coal supplier was solidified in 1942, when the US Government selected Sprague to manage the wartime coal shipment program. They are located in Portsmouth New Hampshire .
Carole McDonough, 4 March 2007