Sucre State Flag is the oldest in Venezuela . In its time, when Venezuela was heavily centralised, it caused some stir. Still, it has remained not only as a very characteristic flag, but also as a beautifully designed one (although it's hard to see when flown). A two-colour field (white, light-blue; these divided diagonally), serve as bed for the State's badge on the white half (upper, lying on the hoist side); and for eleven, white, five-pointed stars (one for each of the State's municipalities;  their number changes accordingly).
White is the colour of purity and nobility, as well as the reflection of Sucre's white sands and production of salt. Light-blue stands for bravery and generosity, as well as for the pristine and clear waters of its sea.
Guillermo Aveledo, 3 October 1999

Concering Guillermo Aveledo image of the Sucre State flag , it should be moted that some  other  flags of this state were published in my Bulletin (issue 2) , but they were not too good images. later I made six more accurate images of these flags.
Good source for this flag is "Los simbolos del estado de Sucre" by Oscar Prieto Ruiz (Rio Caribe 1984)
According Gaceta de banderas (1989) the flag has 14 stars; in W. Smith (1975) the flag has 10 stars. The image from Guillermo has 11 stars so it must be from around c. 1980.
Jaume Olle', 3 Novemner 1999

Since the number of municipios is very fluctuating, I merely rounded up an average of the different versions I had . I assume that the number may vary, and that they actually might change in the near future.
Guillermo Aveledo, 4 Novemner 1999

Has the number of stars on the flag of Sucre (Venezuela) changed again?
I think that the answer is yes if we look at the following page <www.estadosucre.com>. In the accompanying text, it is said that the number of stars depends on the number of districts (today municipalities) which belong to the state. At <www.estadosucre.com/geografia.htm>, it is said that the number of political divisions is now 15 municipalities (Andre's Eloy Blanco, Andre's Mata, Arismendi, Beni'tez, Bermu'dez, Boli'var, Cajigal, Cruz Salmero'n Acosta, Libertador, Marin~o, Meji'a, Montes , Ribero, Sucre,Valde'z) so there's some good reason for the number of stars to be now 15. There are two versions of this flag at the following URL's (one with Coat of Arms and one without it).
Pascal Gross, 1 October 2001

The flag of Sucre state with 15 Stars seems was adopted on 2002 but this data is subject to confirmation.
Raul Orta, 16 March 2005 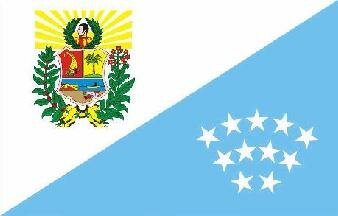 Sucre state flag in <www.lacasadelasbanderas.com> is differ in the stars combination and the CoA from the above flag.
Dov Gutterman, 24 june 2001

At Venezuelan pages in Smith 1982 [smi82] only one flag for subnational entities is given, that of the Sucre state. There is shown the 11 stars version in ratio 3:4~ (we show flags mostly in 2:3 ratio for Sucre). The version in Smith is very similar to one posted from <www.lacasadelasbanderas.com>, minor differences being the darker blue used (practically the same blue as in the national flag) and very minor difference in stars arrangement.
At Crampton's [cra90f]: State of Sucre - diagonally white over blue with the arms in the canton and 10 white stars in the fly (endquote). Sucre flag is basically as in [smi82] - but Smith has 11 stars already in 1975, and also in 1982. Did Sucre decreased the number of municipalities since and afterwards increased them up to 15 used today?
Željko Heimer, 29 August 2003

According to 1981 edition of "Los Simbolos Sagrados de la Nacion Venezolana", by Francisco A. Vargas: "Sucre Coat of Arms dates from 1910. Sucre's Coat of Arms measures (according to the rules on it) 60 cm high and 47 wide. It exhibits a field divided in three quarters. The upper-left one, red or burgundy (it's, how strange, not specified: I've seen it both ways!!) a golden inverted cornucopia appears, as emblem of abundance, flowing out of its realms rich and varied fruits. Inside the upper-right one, on limpid yellow, evocative of the prosperity and happy destinies of the region, a cocotero (coconut tree) rises, fruity and lone, representing one of the State's main crops. The ample lower quarter, light blue, concentrates a wide range of symbols: the pale blue of the heavens, the amplitude of the seas, flowing calmly beyond the horizon. The golden coast exposes itself, breaking its lines to the right where we can see small hills and dunes; to the left, a fisherman and fish can be seen, symbolising, what else, the fishing trade. Below the field, centered, a yellow band ties two twigs, one of  blossomed tobacco (right), and the other of ripe coffee (left). Above the field, a laurel crown sits: inside this crown, amid sunrays (not shown; they are used alternatively) the victorious profile of the Great Mariscal of Ayacucho, General Sucre, can be admired."
Guillermo Aveledo, 3 October 1999