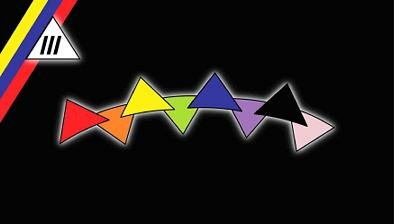 Venezuelan Gay Pride Flag. as appear at <www.vengay.com> (presented by Jessie Rudalsqui and reported by Lidia Coronado):
Attributes and Semiology - Consists in a field with approximated ratio 1:2; this is, two squares of length with black background on which appears eight triangles put in arc with stumped aureoles on the center: four with its points oriented upwards in the colors red, yellow, blue and black alternating with another four with its points oriented downwards in the colors orange, green, violet and pink. Completes the design three diagonal from sinister to dexter with equal size in the colors yellow, blue and red, and a white triangle with stumped aureole loaded with three black and diagonal bars from left to right, all on the canton. Black constitutes a tribute to the night that offers its best things. The red, yellow, blue and black triangles alludes to the life, the harmony, the art and the solidarity, whilst the orange, green, violet and pink triangles represent the health, the nature, the spirit and the pride, respectively. The stripes on the canton remember the Venezolanity and the white triangle represents the purity of the feeling expressed in the three diagonal bars that, as a trilogy, alludes to three stages or forms to love like man, woman and father of who feels represented in it.
Historical Synthesis: - It was created as a result of the celebration of Gay Pride Day 2002 in Venezuela to cover the absence of a symbol which identified and represented Venezuelan Gay, Lesbian, Bisexual and Transsexual Community befor themselves and the rest of the world, trying add it to international symbols already existing. The proponents of this flag describe it as pioneering in Latin American scope and they wish also constitute it a worthy tribute for their community that fights in favor to the principles, rights and duties that correspond to it, without reducing universal symbol that identifies them: rainbow flag.
Until now, we dont know if this design is official and represents that Venezuelan Community or some entity that groups them.
Raúl Jesús Orta Pardo, 17 July 2004