by Vincent Morley and Santiago Dotor

The Republic of Vietnam, otherwise known as South Vietnam. Three horizontal lines form the Chinese ideogram for the word 'south' so this is presumably a punning reference to the country's name: Vietnam means 'south land'. Come to think of it, this makes South Vietnam a candidate for our discussion earlier on tautological names - it means 'South south land'.
Stuart Notholt - 29 November 1995

The South Vietnamese flag is a little longer than standard flag and the strips are not that wide.

The three horizontal lines do not represent the Chinese ideogram. It was created by the last Emperor of Viet Nam (Bao Dai). The red stripes represent the blood line of three regions (Tonkin, Annam, & Cocinchnina). The deep yellow field represent the skin tone off the people.
Dai Vuong - 30 November 1997

The South direction is denoted by "Ly", with a discontinued middle line:

It was true that the first Vietnamese flag (Nguye^~n Dynasty) is a Ly flag. But it was promptly changed to a Ca`n flag because Ly has discontinuity, and the symbolism has changed.

The flag was changed in 1944 to the current flag, which has some more modern ideology. The yellow still is the earth, but is also the color of the skin. The red stripes has the color of blood, represents 3 geographical regions of Vietnam.

This flag is older than the Republic of Vietnam (1954-1975). It was flown when Japan returns symbolic independence of Southern Vietnam and Northern Vietnam (was then a colony and a protectorate of France) to Vietnamese in 1944.

It continued to be used by various governments since then. It is only partially correct to say that this is the flag of Republic of Vietnam. Many still claim that it is the only flag which is worthy to represents Vietnamese.

In 1948, when the former Emperor Bao Dai became the Chief of State of Vietnam, he ordered to change the broken red band into a continuous red band to form the Yellow Flag with three yellow red bands. Then, on June 2nd, 1948, the Chief of the Temporary National Government of Vietnam, Brigadier General Nguyen van Xuan, signed the Ordinance to specify the characteristics of the Free Vietnam National Flag as follows:

The national emblem is a flag of yellow background, the height of which is equal to two-thirds of its width. In the middle of the flag and along its entire width, there are three horizontal red bands. Each band has a height equal to one-fifteenth of the width. These three red bands are separated from one another by a space of the band's height.

Arms of the Republic of Vietnam 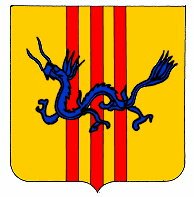 Up to 1955 (under ex-emperor Bao Dai as head-of-state) a dragon in a shield showing the stripes of the South Vietnamese flag vertically. I have no image.

1957-1963 the triangular variant with brush, sword and scroll was used. Official description (information of Vietnamese embassy at Paris to French heraldist Robert Louis, 1957, cited by the above-mentioned article): "The former coat-of-arms was recently replaced by a national symbol, that characterizes the aims of the new republic. It is formed by a bamboo thicket of the species "truc" (Bambusa arundi speciosum), surrounded by a brush, the symbol of the spiritual values, and a sword, the symbol of courage. Bamboo is a plant with upright stalks and twigs and evergreen leaves (also in winter). According to the traditional interpretation in Viet-Nam it symbolizes the firmness, the noble-mindedness and the integrity of the "honest man" (quân tu). The bamboo, the brush and the sword have a double meaning. On the one hand they symbolize the absolute intellectual sincerity in search for the beautiful, the good and the true, on the other hand the absolute moral sincerity in the conception of the means used for reaching this aim."

About 1963 (president Diem's death) a different arms was introduced, simply showing the three red stripes (vertically) on yellow, thus making this a "arms-of-banner". Variants of this coat-of-arms showed the shield on the breast of an eagle holding two objects (sword and brush?) in its claws. Another variant is the shield with a thin red-white-red border and green-grey dragons as supporters (surrounded by grey clouds).
Marcus E.V. Schmöger, 9 March 2003

This is the president's standard of South Vietnam between 1955 and 1963 (Ng^o Dinh Diem). The inscription should mean "duty and sacrifice".

The Transitional Flag of South Vietnam was recently in a news photo of an event marking the 30th anniversary of the communist victory. I guess this means it is still in limited commemorative use?
Eugene Ipavec, 31 March 2005

The Four Power Joint Military Commission was set up to monitor the 1973 Vietnam cease-fire. If I remember correctly, its membership consisted of the rival Vietnamese governments, France and Poland. Since the cease-fire itself was basically a fiction, I doubt that the Commission had much to do.
Tom Gregg, 25 March 2001