Flags at the North Pole 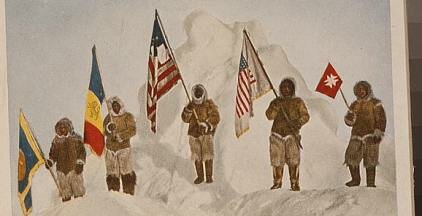 According to a letter of 9 December 1909 from Peary to Edward Trenchard of the U.S. Navy League, "The flags displayed at the Pole were displayed on poles consisting of a tent pole and the shafts of the ice lances, one of which was carried on each sledge.

The five flags are, from left to right in the photograph:

Raising the US Flag on Iwo Jima

The allies stages some wonderful propaganda photos, such as the raising of the flag on Iwo Jima. Chances are (like the Iwo Jima photo) that the original flag raising wasn't photographed, simply because it was too dangerous, and a "staged" flag-raising for the cameras was then performed later.
James Dignan

In high school a friend of mine told me that his father raised the flag on Iwo Jima. I thought he was pulling my leg but went along with the gag. Which guy in the statue is he? I asked. No, he replied the statue was the second raising. Dad put up the first. I continued to think he was just spinning a yarn until a few years later during the 25th anniversary of the raising the local TV stations interviewed a "local man who raised the flag on Iwo Jima" It was my friends father! OK, I thought, he wasn't pulling my leg after all.

Here's the scoop. The first flag raised was just a small flag one of the Marines was carrying (probably about 5 feet in length). This act was photographed (which is how Mr. Lindberg, my friend's father, is able to verify his claim). Later the Marines sent the famous group up to raise a larger flag. So yes, it was the second raising, but not for the express purpose of taking the picture.
Nathan Bliss, 01 August 1996

New Zealand's most famous flag photo is probably of the planting of the flags of (from memory) China, India, Nepal, and Britain's flags on top of Mt. Everest by Sir Edmund Hillary in 1953.
James Dignan, 02 August 1996

Edmund Hillary (in a striking contrast to many subsequent climbers) did not choose to place himself and his country's flag on the top of the world in the photograph. The flags, held by Sherpa Tenzing Norgay, were (top to bottom) the United Nations, UK, Nepal, India.
Per Kolmodin, 05 October 1999

Flags in Paintings from the French Revolution

One painting from the French revolution pictures Marianne (?) leading the revolutionaries and holding the French tricolour.
Željko Heimer

Delacroix's Liberty Leading the People with "Marianne" as a personification of the French Republic came somewhat later IIRC - in any case being a republican symbol she wouldn't have been appropriate as the 1830 revolution the painting commemorates replaced the Bourbon dynasty with the Orleans dynasty but kept the monarchy. Good painting though - Delacroix really knew his stuff.

An image of La Liberté guidant le peuplecan be found at the WebMuseum (widely mirrored).

Talking about French revolutions and flags. I've just finished reading a book about the Paris Commune of 1871. The Communards used the plain red flag, the French tricolour being associated with the provisional government at Versailles which suppressed the Commune. Apparently strips torn from Communard red flags became prized relics in 20th century Communist political mythology and one was taken into space by the cosmonauts of Voskhod 1 in 1964!
Roy Stilling

Red Flag on the Reichstag

The photo shows a young soldier hoisting a red flag on top of the Reichstag and two officers looking at him, and behind, on the street some tanks and a car, and a tram. On the photo the flag is not the one described in FlagFax, it is plain red with the star and hammer and sickle, but without any text. There could be several reasons for that:

Any further evidence? The photograph was later used in the film 'Battle for Berlin', and is fairly well known and published in many places.
Željko Heimer, 31 July 1997

A Norwegian newspaper, Dagbladet, carried an interview with the Russian photographer Yevgeny Khaldei some weeks ago. Khaldei is depicted holding a large copy of the Red flag on the Reichstag photo. Khladei is credited with taking the picture. Here are the main points concerning the flag:

Khaldei told the newspaper the flag was made by his uncle, who stitched the hammer, sickle and star on to a red table cloth taken from the TASS office in Moscow. Khaldei was then on a short stay in Moscow, but soon returned to the front. On 2 May 1945 Khaldei ordered the three soldiers in his company up to the roof of the Reichstag. Various arrangements were tried before the final famous picture was made. The day after the picture arrived in Moscow. However, a month later Khaldei was ordered to fix the picture because the soldier supporting the one holding the flag had two watches on his arm!
Jan Oskar Engene, 01 August 1996

The Royal standard that draped Princess Diana's casket is a personal flag used by members of the British Royal family that aren't entitled to distinctive flags in their own right. It was adopted by the Windsor family in 1917. The flag has a white border with 10 ermine tails laid out quarterly. The flag is divided into quarters and the blue quarter represents the Irish kingdom. The yellow quarter represents the Scottish kingdom and the red quarters represent the English kingdom. Wales is not represented as it was not a kingdom when the flag was adopted.
Mark Sensen, 27 September 1997

According to "Flags of all Nations" published by the British Ministry of Defence (I have the 1989 edition), the flag is the "Standard for other members of the Royal Family"--other here means for members of the Royal family who do not have their own standard (i.e. other than the Queen, the Duke of Edinburgh, the Queen Mother, the Prince of Wales, the Duke of York, Prince Edward, the Princess Royal and Princess Margaret; as far as I know Diana never had a separate standard)
Norman M. Martin, 01 September 1997