The new national coat of arms, adopted 27 April 2000, can be seen at the South African government site.
The former Arms granted by Royal Warrant to the then Union of South Africa on 17 September 1910 changed only slightly over the years. The Arms did not change when South Africa became a Republic on 31 May 1961 and were adopted unchanged in the Interim Constitution which came into force on 27 April 1994.
No mention is made of the Arms in the 1996 Constitution (unlike the flag which is outlined in Schedule 1).
Bruce Berry, 20 Feb 2001

Details of the New South African Coat of Arms as unveiled yesterday, the 6th anniversary of Freedom Day by President Mbeki.  These Arms replace those which have been in use since 17 September 1910. The Coat of Arms is a series of elements organized in two distinct circles placed on top of one another.

The Motto: !ke e:/xarra//ke, is written in the (now extinct) Khoisan language of the /Xam people and literally means: diverse people unite. It addresses each individual effort to harness the unity between thought and action. On a collective scale it calls for the nation to unite in a common sense of belonging and national pride - Unity in Diversity.
Elephant Tusks symbolize wisdom, strength, moderation and eternity.
The ears of wheat in the circle formed by the tusks symbolize fertility, growth and the development of the potential, the nourishment of people and the agricultural aspects of the earth.
The shield is shaped like a drum and has a dualistic function - the display of fertility and of spiritual defence.
The human figures on the shield are derived from the images of the Linton Stone, a world famous example of South African Rock Art, which is now housed and displayed in the South African Museum in Cape Town.  The Khoisan, the oldest known inhabitants of South Africa, testify to our common humanity and heritage as South Africans.  The figures are depicted in an attitude of greeting to symbolize unity.  This also represents the beginning of the individual's transformation into the greater sense of belonging to the nation and by extension, collective humanity.
The spear and knobkierie are dual symbols of defence and authority and also represent the powerful legs of the Secretary Bird.  The spear and knobkierie are lying down to symbolize peace.
The protea is an emblem of the beauty of South Africa and the flowering potential of the nation in pursuit of the African Renaissance and also symbolizes the holistic integration of forces that grow from the earth, nurtured from above.
The Secretary Bird, characterized in flight, is the natural consequence of growth and speed.  It is a powerful bird whose legs, depicted as the spear and knobkierie, serve it well in its hunt for snakes symbolizing protection of the nation against its enemies.  It is a messenger of the heavens and conducts its grace upon the earth, in this sense it is a symbol of divine majesty.  Its uplifted wings are an emblem of the ascendance of the nation, whilst simultaneously offering us its protection.
The rising sun is an emblem of brightness and splendour.  Its symbolizes the promise of the rebirth, the active faculties of reflection, knowledge, good judgment and will-power.  It is the symbol of the source of life, of light and the ultimate wholeness of humanity.
The completed structure of the of the Coat of Arms combines the lower and higher circles in a symbol of infinity.  The path that connects the lower edge of the scroll, through the lines of the tusks, with the horizon above which the sun rises at the top, forms the shape of a cosmic egg from which the Secretary Bird rises.  In the symbolic sense this is the implied re-birth of the spirit of South Africa.
The coat of arms was designed by Mr Iaan Bekker of the design agency, FCB.
A previous design submitted by the Heraldry Council was rejected by the Cabinet, which then approached design agencies to present their concepts. Mr. Bekker's design was one of three which was considered by the Cabinet.

Further information will be contained in the forthcoming SAVA Newsletter (27/00) or from the South African Government Communication System website.
Bruce Berry, 28 Apr 2000

Some weeks ago Jos Poels gave me the next text which he received by email from the SA government:

The Bureau of Heraldry hereby gives notice in terms of section 5 (a) of the Heraldry Act, 1962 (Act No. 18 of 1962), of the registration of the new national coat of arms of the Republic of South Africa.

Arms: Or, representations of two San human figures of red ochre, statant respectant, the hands of the innermost arms clasped, with upper arm, inner wrist, waist and knee bands Argent, and a narrow border of red ochre; the shield ensigned of a spear and knobkierie in saltire, Sable. Thereabove a demi-secretary bird displayed Or, charged on the breast with a stylized representation of a protect flower with outer petals Vert, inner petals Or and seeded of nine triangles conjoined in three rows, the upper triangle Gules, the second row Vert, Or inverted and Vert, and the third row Vert, Or inverted, Sable, Or inverted and Vert. Above the head of the secretary bird an arc of seven rays facetted Or and Orange, the two outer rays conjoined to the elevated wings. Upon a riband Vert, the motto !KE E:/XARRA //KE in letters Argent.Issuant from the ends of the riband two pairs of elephant tusks curving inwards, the tips conjoined to the wings of the secretary bird, Or, therewithin and flanking the shields, two ears of wheat Brunatre.
Source: Government Gazette of 28 April 2000 (No. 21131)
Mark Sensen, 27 Jun 2000

What I'd like to know is how one reads that "thing". I read somewhere that the exclamation mark is for sound of "clicking" with tongue, but what are the slashes and doubleshlashes?
Željko Heimer, 30 April 2000

The Dispatch newspaper, quoting the news agency SAPA, gave a guide to the pronunciation of the motto:
"An approximate pronunciation of the new motto is: (click)-eh-air-(click)-gaara-(click)-eh.
The first click is produced by flicking the tongue against the front of the palate.
The second is produced by pressing the tip of the tongue against the front teeth.
The third is made by sucking air through the side of the mouth. The "g" is guttural."
So, just start practising your San.
Jan Oskar Engene, 30 Apr 2000

They are also clicks, as also the colon. Human languages may have up to six different clicks (thrown kiss, good wine, donkey pusher and three other -- IYKWIM), and Khoisan had probably the most of them. Glyphing these sounds with strange symbols instead of using normal consonant letters is a way to "civilize" these "primitive" cultures and a generation later prove them that our white man's language (english, russian, french, portuguese, whatever) is much more simple and pretty to write and spell --
clearly superior to strange looking url-like galimaties... Instead of "!ke e: /xarra //ke" it could have looked like "Qke egh jhxarra whke" Or something like that...
António Martins, 30 Apr 2000

Bruce did say the Khoisan were extinct. Last figures seem to suggest that somewhere between 8.000 and 11.000 still exist, Free to move inside the Kalahari Desert and Gemsbok Park - about 700,000 sq km (250,000 sq mi), situated between South Africa, Namibia and Botswana. The Khoisan language is NOT related to Xhosa (not even the click sounds). Xhosa is like all other southern African languages, Bantu related. The Khoisan language and the San People (Hottentots, Bushmen, Khoikhoi, Pygmies, or whatever other name they have been known under), are the only exception.
Franc Van Diest, 1 May 2000

San was chosen because they were the first South African people, and it is meant as a subtle sort of reminder that considering that fact, all other South African peoples are interlopers of a sort, and perhaps they should all just try to get along.
Roger & Pam Moyer, 2 May 2000

Does anyone know when the new COA officially adopted? The government homepage mentions the new COA was announced on Apr 27 2000. Is this the official date of adoption?
Nozomi Kariyasu, 3 Jun 2000 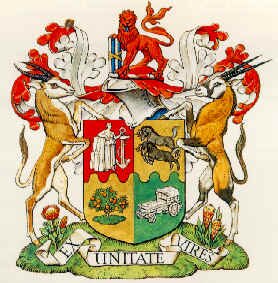 image from this site, reported by Bruce Berry, 20 Feb 1998 Mostbet